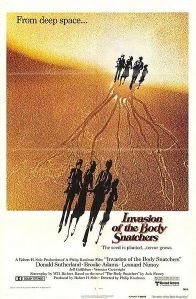 Donald Sutherland as Matthew Bennell, health inspector and cynic. Sutherland has been acting for over fifty years and been in tons of things from the MASH movie to Klute to Animal House to the Hunger Games.

Brooke Adams as Elizabeth Driscoll friend of Matthew. She begins to suspect that her boyfriend has been taken over by something. Brooke has been in acting since a young age. Perhaps most known for this films and Days of heaven. She is also married to Tony Shalhoub.

Leonard Nimoy as arrogant psychotrist and author Dr. David Kibner. Nimoy hoset In search of, was briefly in Mission: Impossible and wore pointy ears playing and alien or something in that space show in the late 60’s.

Jeff Goldblum as Jack Bellicec an aspiring writer, doubting Thomas and quirky wise cracker (yes way different than his other roles). Goldblum has been in tons of stuff includign the Big Chill, the Fly remake, Independence Day and two of those Dinosaur films.

Veronica Cartwright as Nancy wife of Jack and she works at a spa/mud bath place where some alien bodies are later spotted. Veronica was a child actress who was in The Birds, several episodes of Leave it to Beaver and lots of other things. She continued acting as an adult and has been in L.A. Law, Alien and a bunch of other stuff. Older sister of Angela Cartwright (Penny from Lost in space).

Art Hindle as Dr. Geoffrey Howell boyfreind of Elizabeth and one of the first people we see taken over. An actor with over 100 credits who has worked more in tv in recent years.

Kevin McCarthy in a cameo as Dr. Miles J. Bennell warns of being beware of something before getting whacked. McCarthy had a long acting career but is likely most known for his role in the original Invasion of the body snatchers.

Relax, I don’t give neck pinches in this film.

What’s this about? So these spores are blowing around on another planet, oh so they may have allergies on other planets too. Anyways these spores travel so easy across the galaxy making our space program look clunky and slow (as if it wasn’t able to look that way by itself). Eventually the spores come down in San Francisco and start growing these pretty little flowers. Wait a minute these are flowers from space spores so they must invaders from a civilization that couldn’t afford a big old metal flying suacer with which to carry out their invasion. We meet Matthew a health inspector who likes his job a bit too much and can’t tell the difference between a caper and a rat turd. Then we meet his friend Elizabeth whose boyfriend Geoffrey is a big basketball fan. Then the next day Geoffrey gets all serious and loses insterest in basketball plus he takes to not talking much and wearing his tie real tight. This leads Elizabeth to thinking he must not be the real Geoffrey. She tells her co-worker Matthew who at first thinks she loopy but then they meet other people saying people they know are not who they claim and an old dude claims something is up and he dies seconds after that although later it seems to be covered up. They go to see Matthew’s friend Kibner the head doctor who is also a fan of turtlenecks and a half glove that seems to have been distracting viewers of this film for years. Kibner listens to them and shakes up Jack to prove a loony point to Elizabeth that her mind is okay and that nothing is wrong. He tells them to get some sleep and to live long and prosper or something like that. At Jack and Nancy’s mud bath a rama joint they find a blank body and call Matthew in for a look see. They all realize that the body is about Jack’s size and think it’s a growing double ready to take his place! Oh jeepers creepers it’s just like one of them 1950’s science fiction film oh, wait. Matthew races to Elizabeth’s place and sees a double of her growing with the plants. Ah I’ll buy some daisies, lillies and those pods that take over people while they sleep. There is a rush after this as the police are called and the creepy bodies vanish making Matthew and the others look silly. Eventually Matthew finds out that Kibner is one of them, no not a Vulcan but a pod person-ewwww. Our humans go to Matthew’s place for a while but the pod posse are after them and chase them out to the streets. Jack and Nancy lead the pod crowd after them to give Matthew and Elizabeth a chance to flee which they do. Jack gets taken oh dear now his pod double will rant on about chaos theories, but Nancy manages to pretend to be one of them and runs into Matthew and Elizabeth. Not long after this Elizabeth goes beddie bye and is taken over and her nude double rises up. Matthew runs again, there’s lots of running in the second half of this film. Matthew gets a destructive streak and destroys a pod making center in explosive fashion as Elizabeth/pod version comes after him still in her nudie pants screaming her alien sounds and ratting him out. He gets away, time elapses he runs into a still human and hiding Nancy but Matthew turns and lets out an old alien squawk oh, holy hell he’s been taken. Roll the credits.

The negatives- There are lot of odd angles, squeezed in cameos, not so subtle hints and a lot busy stuff that will bog this film down some for a few folks.

The positives- It’s a remake that tries hard to be it’s own film and mostly succeeds in fact it’s very good and just a hair shy of the original for me although lot sof people prefer it. The cast is solid, but Nimoy and Goldblum have alwyas been the standouts for me. Some of the effects are slightly dated, but overall decent. The settings are great in both day and night. The ending is quite good too.

Never fear Smith is here to deliver his insult of the week. It is Hard Headed Harbringer of Evil. So this week you’ll have that one in your arsenal ready to drop on someone that has it coming. 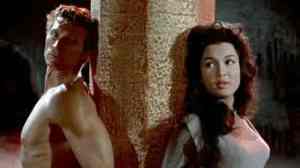 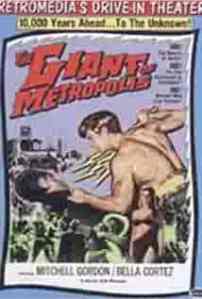 Gordon Mitchell as Obro our hero. Mitchell was bodybuilder who like others of the time went to Italy to break into the surging sword and sandal film craze. He did well for awhile. The fad died around the mid-60’s, but Mitchell stayed over there and maintained a career playing both hero and villain for years eventually having over 100 film credits.

The rest of the cast is a bunch of Italian actors and actresses who are badly dubbed and stand around looking all stiff and serious for the most part.

What’s this about? Well, it Italian made sword and sandal style epic from the 60’s. So that being said you know there’ll be some muscular dude running into sour looking dudes. Obro is on a mission to a promised land with family members and another group. The leader of the other tribe is a heavy set guy who soon announces that he and his followers are turning around and heading back. I guess the walk was too much for him. Obro and the rest head on and a big swirling wind singles them out and attacks them. Only our hero survives and the rest are left as cheap looking broken skeletons with a pile of clothes laying on top of them. The musclebound hero continues on and is eventually nabbed by some guards who pull him along to their leader. Obro walks along all hunched like the ropes are straining him or he needs to take a big dump. The guards take him to their leader who wears a baggy gown and puffy hat. Obro shows him no respect so he is forced to battle a guy who likes a cross between a Morlock from the 60’s Time Machine film and the Skipper from Gilligan’s Island. The battle is about as lifeless as can be with lots of lame bearhugs and funny face making from both participants. The good guy wins I guess as the “battle” ends. Later the hero fights some pygmies in similar unspectacular fashion. The baddies keep Obro a bit longer you know to the pad the film. The baddies mention “science” like every third world like this makes them real high brow in the villain society. There’s a crazy dance scene that has to be seen to believed. After the opening half hour the rest of the film seems like they just make it up as they go along. Eventually it comes to some sort of an end.

The negatives-It’s like they were not content with just the usual fighting in these kind of films. They tried tossing in more sci-fi themes and it just felt even more clunky. I was expecting a typical film for the genre instead it was just a bizarro piece with some odd enough to be alright parts but mostly it’s a mess.

The positives-Some of it is amusing enough, but there’s just not enough action or camp to make it worth more than one viewing.