Jeff Bridges as Jack Prescott a primate paleontologist, stowaway and wearer of a big beard.. Bridges is a veteran actor that you know from lots of films including Tron, Starman, The Big Lebowski, Iron Man and tons of others.

Jessica Lange as Dwan a young woman found in a raft. Both Jack and Kong fall for her. Lange was a model when she was approached to do this film. She received some unfavorable reviews for her performance her and spent much of the next three years receiving acitng training and din’t do another film until 1979. Since she has had a respectable acting career.

Charles Grodin as Fred Wilson who is looking for oil and acting like a jerk. Grodin has been a variety of things over the years including Rosemary’s Baby, Midnight Run and the Beethoven movies.

Rene Auberjonois as Roy Bagley assistant to Fred. Rene is a veteran character actor with close to 200 credits. He has been in tons of tv shows, movies and done various cartoon voices frequently playing snooty types. Best known as Odo onn Deep Space Nine and Clayton on Benson

Also look for 1950’s monster film leading man John Agar in a small part as a city clerk. In the 50’s Agar was in Tarantula, Revenge of the creature, The mole people and more.

Wilson is convinced there’s oil, no not in his hair but on an island hidden by a fog bank. So they set out on a three hour tour or more to see if the oil is there or not. Along the way they pick up a blond floating in a raft and a shaggy dude name Jack is found to be a stowaway.  Jack says they shouldn’t got the island because he thinks a giant beastie is there. Eventually they come to the island and oh it’s so pretty and all, but it is inhaibited by natives who love to sing and dance a lot. The two groups meet, but tWilson and his people head back to ship. However natives sneak aboard in the night and grab Dwan eeek! She is then dressed up and left out for a guy in a monkey suit to come and get her. That can’t happen, no self respecting hippie stowaway will allow it to be so Jack and some ship’s crew go after Kong. Some goofy guys get shook off a tree bridge by the big old monkey. Kong wrestles with a giganto snake and rips it’s jaws wide open ewwwww. Eventually the crew get Dwan back and put Kong on board so they can do what Americans do best-exploit others for cash. You can see it coming Kong breaks lose in the Big Apple and the ploice and military are after him. He squishes Wilson like a rotten grape, gets Dwan and heads to the big tall buildings. Helicoptors go after him he lets himself get shot and the monkey falls down and goes boom. We are all sad as he lays there while Jack decides not to go to Dwan. Roll the credits on this depressing ending.

The negatives-It’s a man in a monkey suit. The film tries to be it’s own Kong, but ultimately it falls short of putting enough of it’s spin on the classic tale. Lange tries and she looks good, but her preformance is hit and miss. Bridges is usuallly right on and he is mostly here with his acting, but the character seemed a bit too self-righteous for my liking. By the end of the movie I always want to punch him in his big beard.

The positives-The plot of how they get to the island is interesting enough. Much of the scenery particularly on the island and at sea looks great. Grodin does a fine job playing the greedy Wilson. Rick Baker tries as Kong. John Berry’s score is fantastic. The film has some flaws, but is overall decent although I have wished it had been just a little better. I’ll have some about my history with this film when I cover my history with Kong later this week. 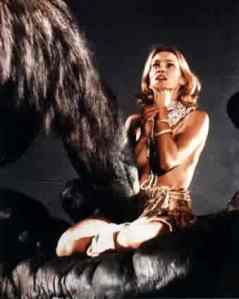