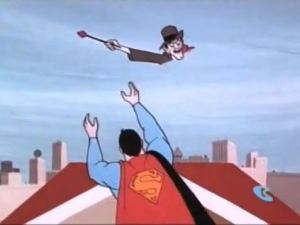 This was a cartoon show done by Filmation during thee 1966-67 tv year.

What’s this about? There is black magic about as a bent faced, cackling no good bum by the name of the Warlock is out to cause some trouble. He has a magic wand that he can use to create things and move objects. Superman is on to him, but the Warlock turns invisible before out hero can nab his miserable hide. The mischief doing magician grabs another stone that fuels his wand and Supes now knows his power comes from said wand. The man of steel double dog dares (or something like that) the Wiazard to do a task that cause the wizard to lift the wand high. When he does this Supes flies over really fast like and grabs the wand. The villain vanishes and presumably flees since the source of most of his power has been taken from him.

I’ll get you and your red cape too.

The negatives- It’s only five minutes and fans of more recent eras of comics may not be that impressed.

The positives-I think this is comparitive to what was going on comics of the 60’s which I like. Superman and Clark both have a sense of humor. The pacing helps in that the episode goes by very quickly. I also snickered when the Warlock called Superman “Superboob” although not to his face.

Like almost every other episode of this show there are some bad toughs in suits and hats. You can bet that they are up to no darn good whatsoever.

What’s this about? Professor Winklepoppers has developed a way to make gold, but important people tell him to forget all about that because it could mess up the whole money system for the U.S. of A.  So Professor Pooperwinner puts a lid on that one. However he has also found a way to extract Krytonite and make a pill that will give normal every day smucks the powers of Superman. So Lois and Jimmy woof some down like they are M and M’s. Then they fly around and eventually beat up some bad baddies. Then when Super Jimmy and Super Lois return to see Professor Picklewrappers and Jimmy gets accidently wonked on the head kerpow. He wakes up and turns out he has no powers, but hey that part was all a dream anyhow (wtf?). Hey, we lost the plot quick toss some mean hat wearing types at Professor Purpleweiner and let’s bring back the making gold angle which they force him to do. Turns out it cost more to make this gold than the gold is actually worth so it’s like the crappiest invention ever. Thanks a lot, Professor Plunkerwormer. The bad evil rough and toughs are really mad now, but hey not the youngest Superman ever shows up to stop and save Professor Plumberwoozle. Roll the credits.

The negatives-This was the last episode show and there are better episodes. Really this was a show aimed at kids and it’s more very light action and mystery maybe then it is a Superhero show. Superman is just thrown in to wrap things up. The writing here is very tedious. The acting is what it is. I liked this show when I was like 5, but now it’s more difficult to watch.

The positives-Well, it’s a Superhero show and there is some nostalgia value. George was the first non-animated Superman I ever saw.