Ah, good day to you and once again I am sure that you are awaiting the arrival of another insult. Very well it is Cybernetic Simpleton. Please put that to good use this week.

Yvette Vickers eventually had over 40 credits and worked very regularly in the late 50’s. She’s most known for this film and Attack of the 50 foot woman. Jan Shepard migth technicly be the femal lead here and Vickers has very few lines in the second half of this film, but make no mistake about it she’s still the star in this one.

Ken Clark as Game Warden Steve Benton defender of wildlife, wearer of stiff hair and believer in no expressions. Clark worked regularly in the 50’s and 60’s. Often played cowboys as well as military and police types.

Jan Shepard as Nan Greyson, she hangs out with Steve and looks inquisitive. She worked regularly from  the early 50’s through to the early 70’s and was in everything from The Virginian to Captain Midnight to a couple of Elvis films.

Gene Roth as Sheriff Kovis a real grump. Okay this is a smaller part than some others I am not mentioning, but this guy was a solid character actor appearing in lots of western shows and B movies like the one, Earth vs. the spider, She demons (review must be done at some point) and others. He could play a grump, a villain or even an alright guy or whatever was needed.

Some old redneck spots what looks like a trash bag with suckers on it and thinks he killed it. Later another one kills him and he shows up with bloody circles on his face. The game warden tries to figure this puzzle out- hohum. Meanwhile the local tramp who is married to a heavy guy twice her age starts fooling around with a greasy goof. Fatty finds hottie and the oily goon and chases them with a gun before forcing them into swamp – sploooosh where the blood suckers get at them. Others have vanished too. Steve the game warden still seems puzzled or bored or vacant, all his expressions look the same so it’s hard to tell. Evenetually they discover they are dealing with leeches, giant ones no less. They also figure they have a cave where they keep people and suck the blood from them kind of like many B movies suck the life from me if I watch them too often. Steve and another doof fight it out with a giant leech. Eventually the upstanding citizens shove a bunch of TNT into the water-kaboom and the leeches are history. Roll the credits.

The negatives- The first half of this film is way better than the second half. The last twenty minutes are far slower than they should have been. Some of the acting (the goodie goodie lead couple) is extremely wooden like I see the termites a coming kind of wooden.

The positives-Despite the negatives this is still mostly what a good B movie should be-it has monsters, a weird situation, a fair amount of victims and some good character actors. Plus the swamp and leeches make it a little different. Yvetter Vickers is certainly a scene stealer in this movie.

If the second half had been a as good as the first half this would be a classic B movie, but it’s still decent. 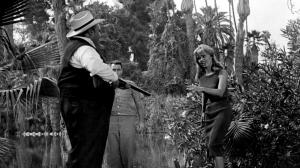 Now that thing sure don’t shoot no Nerf darts so you best be careful with it!

Thanks to Lauren for nominating me for this. She is at  http://mykindofmovie.wordpress.com/2013/07/08/the-liebster-award/

So the rules state that the receivers of the Liebster Award must: 1. List 11 Random Facts about yourself. 2. Answer the questions that were asked of you (by the blogger that nominated you). 3. Nominate 11 other blogs for the Liebster Blog Award and include link to their blog. 4. Notify the bloggers of their award. 5. Ask the award winners 11 questions to answer once they accept the award.

Oh and don’t forget to thank those who nominated you!

11 Random Facts about Yourself

7. My butt went numb when I saw Dances with wolves at the theater (ps.-I didn’t like the film much either).

9. Marvel and DC are closer in my book then they were as a kid, but I still prefer Marvel.

1) What book would you recommend for me to read and why? The Illustrated man by Bradbury, it has so my wild stories to stir the imagination.

2)What is your favourite post you’ve written on your blog and why? All the Zardoz funnies. They take a while to do but they are fun.

4) Who would play you in the film version of your life? Willie Garson if he was taller.

5) What tv show/film do you watch when you’re feeling down? The Wizard of Oz, original Trek or Cheers.

6)What’s your favourite Disney film? Sleeping Beauty without a doubt.

7) What song sums up the day you’ve had today? No idea.

8) Do you believe in fate or free will? Free will, wait was I destined to respond that way?

9)Are you a cynic, optimistic or realist when it comes to life? Some of all, depends on the situation.

10) Do you belive in ghosts? I think it’s possible they exist.

11) What film are you looking forward to seeing next? Pacific Rim

-I won’t nominate anyone because I just prefer to open it up to everyone who wants to answer.

Here are my 11 questions.

1-If you were a gumdrop what color would you be?

2- What was the best film from the year you were born?

3-What tv show could you watch over and over?

4-If bigfoot and Nessie duked it out in the Bermuda Triangle who would win?

5-Recommend a movie to me that you think I have probably not seen (Gone with the wind doesn’t count, smartie).

6-You can listen to one album for the next month what would it be?

8-What word or phrase do you use way to often?

9-Would you rather have a time machine or a rocket that could travel to different galaxies?

10-What is the last costume that you wore?

11-You get to make a movie, what’s it going to be called?

Sally Fraser as Joyce Manning sister of the title character. Fraser was in a number of things between the early 50’s and early 70’s including western shows and sci-fi films including this one Earth vs. The spider, It conquered the world and Giant from the unknown.

Roger Pace as Major Mark Baird who is trying to help deal with the title character. He was in only a handful of things in the 50’s.

Deak Parkin as Colonel Glenn Manning the giant dude. He was in this film and the Cyclops as well being listed as a stage hand for The beginning of the end so he worked with director Bert I. Gordon several times. Glenn Langan played this role in the first film.

Hey, put some clothes on, buster!

What’s this about? So a food truck was robbed out in the desert. The suspect is several stories tall, has one eye, growls and appears to be wearing a gigantic diaper. Wait a minute is this description being called in from a bar? No, actually the Amazing Colossal Man survived a shelling from the Army, a huge fall into the water and trip downstream to Mexico. Now he winds up with one eye, being played by a different actor and in a sequel. His sister thinks the food trucks have to do with her brother and goes to look with a military dude. They find that it is the giant they were looking for So they dope up some bread, have him eat it and then haul him off to an airplane hanger where they chain him down and do not much else. Of course he breaks out, growls a bit and stomps off towards an observatory. There he stands around, shakes a bus full of kids for a little bit and stands some more. Then his sister tries to get him to remember who he was, he does for a second but then grabs the power lines and kapow the whole film is in color and the baloop the film is over so roll the credits.

I see a birdie and some clouds and yeeeeeahahahahah!

The negatives-This movie is under 70 minutes and still seems long because there just isn’t enough happening. There’s lots talking blah, blah, blah even from reporters, police and others that adds nothing to the story at all. I imagine director Bert I. Gordon franticly waving his hands yelling for people to stretch out their lines because they needed somehow make this thin little script into being film length. Then a light bulb pops up over his head, hey right before the end of this film I’ll just plop in a flashback of stuff from the previous film. That will give the film enough time, shew problem solved.

The positives-The title is awesome even though he’s not much of a beast and there isn’t really a war. He’s a giant so that’s good. There’s some good black and white photography. Sally Fraser deserves some credit for trying to give what she can to this movie.

The film had a little potential maybe, but it’s big on filler and thin on action.

*****Giant Monster week moves on likely with some giant old leeches on Monday.