1-Trixie from Speed Racer. The girlfriend of Speed Racer so she wasn’t totally independent, but she was way cool. She knew about cars, she could pilot a helicopter and she even knocked down bad guys at times.

2-Velma Dinkley from Scooby Doo. Scooby and Shaggy were the comic relief, Freddie was the drives, Daphne was the eye candy, but the brains and heart and soul of Mystery Inc. was definitely Velma. Just a shame she kept dropping her glasses.

3-Jayna of Zan and Jayna from the Super Friends. An alien who partnered with her brother and were in the Super friends. She could turn into an animal while her brother could turn into some kind of water related substance. So Zan would be snowball or some ice cubes while Jayna was a tiger or an eagle-who got the best of that deal?

4-Gravity Girl from the Galaxy Trio-She left a pampered life to fight crime. She is also the equal of her two male teammates.

5-Natasha of Boris and Natasha from The Rocky and Bullwinkle show-Hey, I didn’t say they had to be heroes. Actually the show began in 1959 but lasted until 1964 so it spent more time in the 60’s. She was cruel and cool at the same time. Kind of creepy yet still likable. 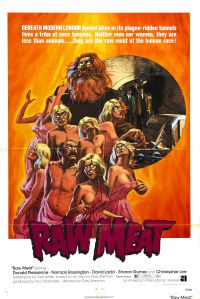 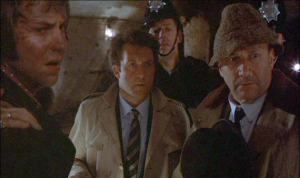 Donald Pleasance as Inspector Calhoun a police who is unwilling pulled investigating the disappearance of an official. Pleasance was one of those who gave his all no matter what he is was in. He was in a lot of films including From beyond the grave, Fantastic Voyage, You only live twice and I also heard in some sort of Halloween films and something called Escape from New York.

Sharon Gurney as Patricia Wilson. She seems pretty cool but she has an American boyfriend who seems to just get into trouble. Gurney was in a handful of things between 1968 and 1974 including the Corpse/Crucible of horror. She is the daughter in law of Michael Gough (Batman, Horror of Dracula).

David Ladd as Alex Campbell a floppy haired American living in England. He has a cool girlfriend and he gets into trouble. The son of Alan Ladd, David got into films as a child and acted into the early 1980’s. Perhaps most known for being in Misty.

Hugh Armstrong as “the man” a cannibal living in a side passage of the subway. He has had twenty some film and tv credits stretching across five decades including roles in The Beastmaster and Girly.

Horror legend Christopher Lee has a cameo in this film too being all snotty and sporting a big mustache.

What’s this about? Some snooty official in a derby is hanging near the subway trying to pick up prostitutes and ends up getting a knee in the groin and then something else attacks him as well. Patricia and Alex run across him while he is knocked out. Patricia talks Alex into telling a policeman about it, but when they go back the guy is gone. A grumpy and hilarious police man named Calhoun ends up getting the report and finds out the man who was seen is a higher up in the government- “some big shit er..shot”. Other higher ups deny he’s missing, but apparently he has vanished-oh, dear. Then once Calhoun stops grumbling and ranting about tea bags and such he realizes other people have vanished at that same part of the subway in recent months. Alex is questioned about all this and he gets huffy and growly even to the point of having and argument with his girlfriend who seems too good for the likes of him anyways (I always strive to put anyways into all of my reviews). Meanwhile down in the subway we see that the missing official has become a meal for a cannibal living down there. Said cannibal is trying to help his dying and pregnant mate but to no avail as she dies awwwww. Seems some time ago workers were sealed off down in the subway and left for dead, but they lived and had children-disfigured, flesh eating children and now there is one left. Mr. arm eater run into some maintenance guys on the platform and promptly kills them all-nasty business, very nasty. Calhoun is still suspecting Alex and getting drunk at going on some incoherent rant. At some point Alex and Patricia get separated at the subway not to be confused with splitting a sandwich at Subway. The nasty underground dweller grabs Patricia as his new squeeze and takes her down to the rat infested pad so he can offer some raw people flesh, rip her top off and try to rape her-lucky girl. Alex eventually saves her, the coppers show up and the ugly guy gets it. Roll the credits. 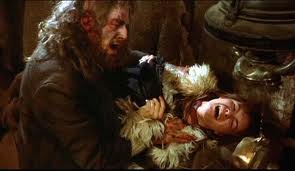 “Yes, I did just eat some toes, but that’s no reason for you to call me skunk breath”

The negatives-I’ve heard complaints about the police parts and the first 2/3 of the film not adding to the story and that just need to watch the last third. I think people who feel that way should stick to watching twenty some minute cartoons if their attention span cannot handle a real film.

The positives-Pleasance is awesome, the best role of his long career. You’ll want to rewind parts just to hear him say it again. The story is strong and I like the roundabout of getting there because it adds to fact that it’s hard to believe what is really going on here. Hugh Armstrong doesn’t get enough credit for his performance here-he’s vicious when needed and pitiful when called for as well. The sets, settings and music are also solid. Great film and a must see.

The man mutters “mind the doors” which may make no damn sense to American viewers. However we have been informed over the years by people on the other side of the pond that this term and “mind the gap” were and are terms used to inform passengers that the doors are closing on the subway trains. The flesh gobbler had heard this all his life from living down there and repeated it.