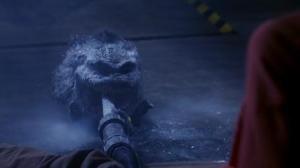 So wait they made a 4th one of these or wait there was a third one and then a forth one? Yes, they did although both films just rehash the first two quite a bit.

Don Opper is back as Charlie the hick turned intergalactic bountyhunter in this one. Guess if you brother is the producer you know you’ll always have work.

Terrance Mann as Ug/Counselor Tetra. The once main bounty hunter appears briefly at the end of this film under a different name and title.

Angela Basset, Brad Dourif and Anne Ramsay all have parts in this film. Dourif was already working steady and has continued on actually stronger since this time and the other two went on to bigger things.

What’s this about? Charlie gets trapped in a pod with the last two Krit (Critters) eggs, what a dingus. A group of the most dull space pirates ever are goofing about in space. This crew consists of a bored young, floppy haired dorkus, a scuzzbag captain with a terrible accent, a chubby greedy lump, a glasses wearing tech type and the athletic girl who has trouble smiling. This crew finds the above pod and are ordered to bring it to this space base where some higher up will come to get it and pay them. Captain scuzzy gets all huffy after the female crewmember whacks him in the face for walking into the shower on her. So in a rage he goes and opens the pod by force early. Charlie bumbles out and the not so bright Captain goes in to see what else is in there and of course he gets ripped apart by the newly hatched critters. That’s what you get for not watching the other films, dirtbag. Greedy fatty is on another level stealing pills to sell, but the Krits turn him into a bloody grease stain too. The remaining three crew members and Charlie try to figure out how to get off this place to avoid bloody death-ewwww. Meanwhile the Krits discover a lab and start making clones of themselves, but fortunately not clones of this film. Charlie shoots one of the sharp toothed nasties but damages the ship instead-you dumb dumb. Another Krit gets frozen and smashed into pieces-which is alright except my mind had become numb by that point. There is lots of running around, I was falling asleep and then former bad ass bounty hunter Ug shows up calling himself Counselor Tetra and acting all cold and snooty. He cares nothing for the remaining crew oh and the tech guy gets it around this time too. Tetra/Ug wants the last egg to…

Well we never quite know which answer it is because Charlie shoots him first. So Charlie, the flop haired guy and the athletic woman leave in the remaining ship. Charlie screws with the ship’s controls when he was told not to, the ship flips around and likely they kid throws up while the woman gives Charlie the beating he deserves-roll the credits.

The negatives- The critters appear less in this film then in the others. When they do appear they seem less animated and even less vicious. The acting here goes from okay down to “good lord get off the set”. More than that was we never see enough from the characters to give a rat’s bottom about them. If you thought Charlie was annoying before then well you are in for worse here. Ug/Tetra just shows up at the end and we never get a proper explanation about why he is suddenly a bad guy. We could assume power took him over, but this part seems tacked on and it wasn’t fun watching the best character of this series suddenly go to the not so good side. Most of the film just feels rather hollow like they didn’t have any great ideas and everyone is just hanging out waiting for this big twist with Ug to come and save the film-it doesn’t save it.

The positives-So it’s a rip-off of aliens and if you rip off something at least copy something good so they got that kind of right. The Krits came from space so having this one back in space kind of makes sense. The sets of the ship and base are okay, kind of generic but alright. Firefly fans will cringe at this, but of some Serenity’s interiors look a little like what’s in this film only far better of course.

I like the first two films a lot. The third one was probably not needed, but has some moments and there are characters that we can care about a little. This film doesn’t add much to the series and feels like a bit of waste of time.