That will wrap up Hammer films week. I had seen all three films I reviewed this week many times, but actually had not seen any of them in at least two years. So as usual my blog gave me the opportunity to see films I had not seen in a while and gave me a chance to re-evaluate them. During Hammer’s first run they went almost 20 years churning out horror films. Not all of them were great, but many were and at the time Curse of Frankenstein in in the late 1950’s giant monsters were still the rage. Hammer managed to revive many of the classic monsters that had been popular for Universal in the 30’s and 40’s. Hammer then created their own style of horror and kept it going on low budgets. Even though they didn’t have high budget’s they frequently had solid acting, good sets, great musical scores and decent scripts. There is certainly a reason why many of the films have stood the test of time.

If you have never watched many Hammer horrors I’d suggest these ten to get you started.

Horror of Dracula AKA: Dracula

The Curse of Frankenstein

Curse of the werewolf

Kiss of the vampire

Plague of the zombies

Frankenstein must be destroyed

Blood from the mummy’s tomb 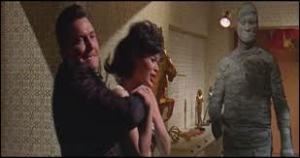