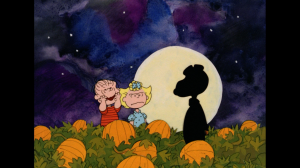 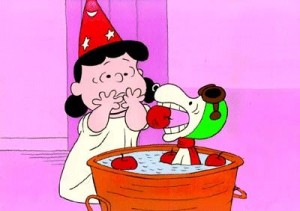 Linus and Lucy steal a pumpkin and race it off to their house. Linus who would seem to be around 6-8 has apparently lived under a rock and has never seen anyone pull it’s seeds before as he acts like a loon when Lucy does this. Linus then tries telling everyone they should sit out in a cold, wet pumpkin patch on Halloween night and wait for this Great Pumpkin to pop up and give them treats. Sound like he just wiped out all the smart things he said at the Christmas special. Sally believes him, but we know she not the sharpest knife in the drawer either. Everyone else prepares for trick or treating. Charlie Brown can’t cut very well or grow hair or keep his clothes on at a baseball game. Oh but that not cutting so well thing gets him a crap costume which may or may not have been the reason he gets a bunch of rocks instead of candy while trick or treating. All the normal kids get candy even nasty old Lucy although she does ask for candy for her brother because he’s out being a lunkhead and sitting in the pumpkin patch. Eventually they all go a to a Halloween party where Lucy kisses Snoopy by way of an apple. Ew, yuck Lucy germs! Then Snoopy goes off in a big fantasy/WWI flying ace thingie complete with weird music. Eventually Snoopy rises up out of the pumpkin patch. Linus thinks it’s Great Pumpkin and falls over. Sally gets some sense and yells at him before storming off. Silly Linus falls asleep out there alone and dies a horrible death oh no wait Lucy came and got him and took him before the death part. Charlie Brown regrets having a rotten holiday while Linus says he was not wrong and he will show everyone next year as he goes off on a lunatic rant while the credits roll.

The negatives-Not so much except for the depressing part on how bad Halloween stunk for Charlie Brown. Maybe he needed to move to a town where the adults weren’t so cruel as to give rocks to kids on Halloween.

The positives-A holiday classic. We watch it every year and had it in while we carved the pumpkin on Halloween this year.