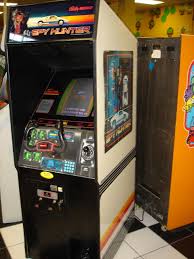 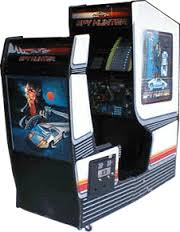 Between 1982 and 1985 I would to the bowling alley with my dad. While he did his bowling league thing he gave me a few bucks and I had a few hours to kill and had to decide whether to spend the money on comics, video games or food. Normally video games won out as there was an arcade in the strip mall and the bowling alley had six or seven games as well. The first time I saw Spy Hunter the bowling alley actually had it before the arcade. It was a stand up machine at the less crowded end of the bowling alley. I had recently been on a Turbo kick so I alright with a new driving game. The Peter Gunn theme came on and that was a good start. Wait, I have weapons and I can battle these bad guy cars? Whoaa this is like James Bond only I don’t have to put up with Roger Moore’s smirking face. This was one of the few games where I had to wait in a line at the bowling alley to play it.  When it finally came to the arcade it was a sit down version. Sitting down playing that in the dark and loud arcade was a fantastic experience and not’s like the game needed a lot to elevate it, but it got even better that way. I actually got better at this game the more I played it as well, that didn’t always happen with every game. When I have played it again in recent years I feel like even though the graphics are on it’s time the game has remained very playable and fun. 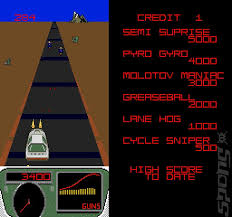 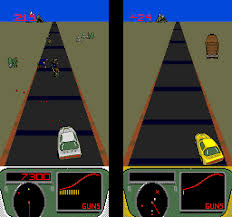 I actually never played or even saw Spyhunter 2 when it was released and I understand it only received a limited release anyways. I have played it recently as I was excited to see if it lived up to the original. Instead of the flat overhead look of the first it has a semi 3D look kind of like Turbo. Even though it was made in 1987 the roads don’t look of scroll as well as something Pole Position which was made several years earlier. Actually the car doesn’t handle as well as that game either. The car movements are slightly clunky. A simple move to one side looks like you are fishtailing on an icy road. I like the two drivers at once feature. Overall it’s not nearly as fun as the first game. I lost interest in the game pretty quickly, but not every video game sequel was MS. Pac-Man or Donkey Kong Jr.