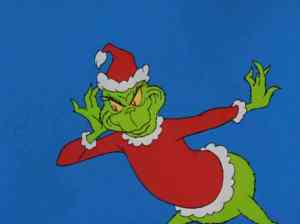 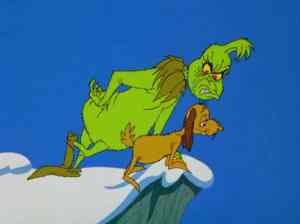 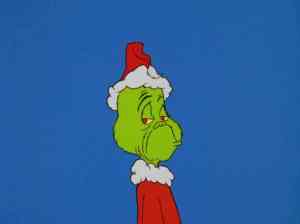 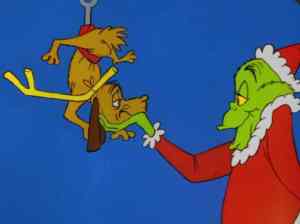 So this oddly shaped fella called the Grinch lives up on this mountain. He hates the Whos who live down in the village, he hates Christmas and apparently he’s not too fond of clothing because he strolls around naked. Christmas is coming so the Grinch develops this crazy plan where is going to animate the Statue of Liberty with goop and walk around in it oh, hey wait I think I just mixed up the notes of the Grinch with Ghostbusters 2. Now, here we go the Grinch will dress up in a crap Santa suit (yet he still doesn’t like pants). Then he makes his poor little doggie Max pretend to be a  reindeer. On Christmas eve they go down to the Who village and start taking all their Christmas stuff. So not only is the Grinch a near nudist but he’s a thief too. A little who named Cindy Lou Who wakes up and questions the Grinch, but he lies (another strike against him) and goes about his horrible business. He takes all his collected stuff in his sleigh back up the mountain to dump it and really create a mess. He thinks that this will really curdle the Who’s milk. However they wake up singing. The Grinch stops and realizes he’s been a real nasty guy so his new found goodness helps him to stop the sleigh from falling off the mountain. He and Max ride back down to the village, give all the stuff back and fortunately instead of beating the Grinch senseless for his crimes the Who’s are a forgiving lot. The Grinch has Christmas dinner with Whos and cuts on something called a roast beast. Now he’s a good Grinch. Roll the animated credits.

Positives-A great adaption of a wonderful Dr. Seuss book. The Chuck Jones animation is fantastic in bringing these characters to life. Boris Karloff is one of the few people who could have done justice to the Grinch. A classic cartoon through and through.

2 responses to “How the Grinch stole Christmas”