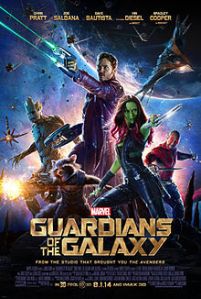 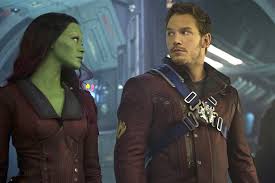 Yes, I was on Star Trek, but no I wasn’t green then. 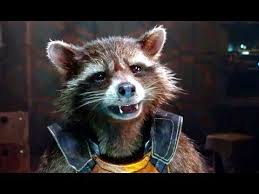 Shhh, the raccoon is going to talk.
2014
So a thief, a green woman, a shirtless wrestler, a talking raccoon and a tree dude come together. Wait is this the set up for a bad joke your grandpa would tell or a movie? It could be either, but since I saw it the other day it seems like it might be another movie. This Starlord guy began as an earthling who was abducted by space pirate type fellows. So was he Starlad when he was little? No, I don’t think so. He and the characters above are all drawn together around this orb thing that others want to. Greed and lust for power motivates various characters to go after this orb thing. Blah, blah, blah get on with the action because we didn’t check out a superhero movie for a deep plot. There’s a prison, a jailbreak, deceit, space action and bad guy snarling. I think they play some 70’s music here and there to promote their soundtrack. Everyone laughs at the talking raccoon, wahahaha or they laugh at the talking tree and his one line “I am….what was that name again”. So the greedy heroes act less greedy and the short sighted heroes act like they care about someone besides themselves. Eventually sides are drawn for a big space battle. Yeehaw get them doggone lasers fired up! Phew, phew, phew those CGI ships shoot it up and some snappy dialog is tossed in between all this action. A major hero dies (but he’ll be back for the sequel I’m sure), the bad guy dies right away-yeah right you know they have to stretch this thing out and have the baddie last for a while. The heroes come together to win-oh how sweet. Roll the credits and rake in the bucks. 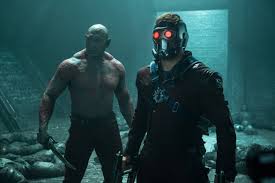 Tell me when stench is gone and I’ll take this thing off.

The negatives-This movie doesn’t really do anything new. At times it comes across like what happens when a bored five year old pulled all their action figures, space ships other toys together and played with them all at once just going from battle to battle.

The positives- The character become likable and work well together. The acting is overall very solid. The action is non-stop and everything looks top notch.

The lesser known Marvel characters become more known and the film was a well deserved hit. I went in thinking I’d liking it came away thinking it was the best I saw in 2014. 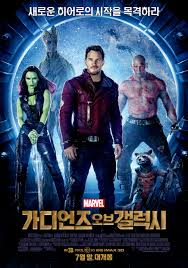