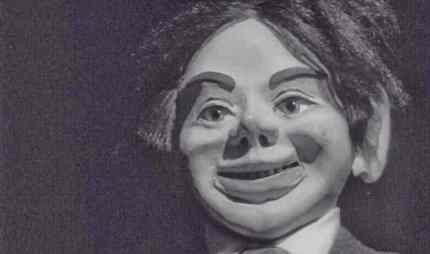 1-Cheesey hypnotists/ventriloquists were all the rage in 1964.

4-Ventriloquist dummies can turn on you if you put an unwilling human soul into it.

5-Top newspapers don’t have anything better to do than to cover cheesey hypnotist/ventriloquist acts.

6-Don’t take your girlfriend to see a hypnotist or else he’ll hypnotize her and try to steal her away.

8-Being the assistant to a cheesey hypnotist/ventriloquist will likely lead to your death.

9-Putting a human soul into a ventriloquist dummy is easier than you’d think.

10-Switching souls from a ventriloquist dummy with a mean cheesey hypnotist/ventriloquist is even easier than number nine.

*Bonus from the “continental version”-Don’t go on stage with a cheesey hypnotist or he’ll turn you into a stripper.

This isn’t a great film by any stretch of the imagination. It’s tedious, the script is fairly rotten and the mannequin/doll coming to life idea has been done better by other people. The positives are it was smart to film it in black and white and actually much of the camera work is quite solid, the on stage performances were not great but the attempt was decent and casting Yvonne Romain was always a good choice. It’s far from a great film and if hadn’t have been for my love of British horror from the 50’s to the 70’s I likely wouldn’t have tracked it down. Still I do tend to watch maybe once a year.

Also for a lesser known film Image did a fine DVD release years ago with both versions of the film, a commentary, still gallery and a trailer.

4 responses to “Ten things I learned from The Devil Doll”