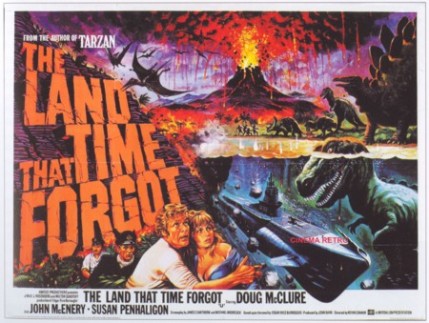 1-There’s always a German submarine out there waiting to get you.

2-Rich, business adventurer types are good at everything.

3-Taking over a submarine is easier than you’d think.

4-If you through a tunnel in the ice you will run into a tropical area.

7-Cave people look like they have oatmeal on their faces.

8-Triceratops don’t like to move far or they can’t move very far.

9-British and German crews will never work very well together.

This loose adaption of an Edgar Rice Burrough’s story was the first of four fantasy films that actor Doug McClure and director Kevin Connor did together. They all featured low budget effects. This film used to be on TV a lot on Saturday afternoons in the 80’s so I saw it a lot then. It’s okay overall. I like the idea of it, but the effects and the wooden acting bog it down some. Still worth watching once for dinosaur fans.