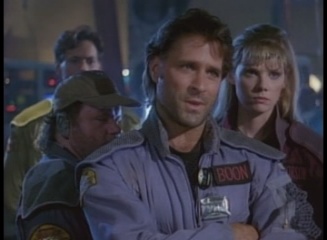 Doc Kreuger (Jack McGee)-Flight engineer who has had lots body parts taken off in combat and replaced by mechanical pieces.

Jojo Thorsen (Marjorie Monaghan)-The pilot of the ship. Tough, but quick to fly off the handle some times.

Daniel Kincaid (Danny Quinn)-The rookie on Boon’s team. His daddie is a general. He thinks himself a gunslinger of sorts and is sometimes to quick to draw his weapon.

Dr. Mimmer (Clint Howard)-Fort scientist and a bit of a whack job. Frequently wants to go on missions, but is turned down.

Colonel Erich Weiss (Gottfried John)-Second in command at Fort Hope. He must have angered someone back on Earth and got transferred out here. Tries hard to get back to his old job.

The pilot finds Boon recently back from a grueling mission. He sees his wife for like two seconds. Then he has to gather his crew and go on a rescue mission to where a former ranger may be in trouble or he may be up to something (gee, guess which one it is?). Boon gathers regulars Doc and Jojo from a betting parlor where they hustling people in something looks like the old Mattel game Simon says only not as colorful. Plus he brings  controlled savage type Zylin out of some freezer thingie so he can go to. Newbie Kincaid begs to go along and Boon says okay but don’t shoot anyone’s rear end off. They go off in their ship which looks a cross between an X wing fighter and a WWII plane only sadly not as cool as either. They get to the planet and everyone except Kincaid goes down (because he might shoot someone’s rear end off). They go the planet via these little individual pod type thingies. Down on the planet they attend a party with cakes and games and unicorns..just kidding it’s a set-up by the power hungry former Ranger and some crumpleheaded monk type. They grab all the crew Kincaid who was left behind. The former Ranger reveals his greedy plan blah, blah, blah. He has the crew strapped down and in a little cave. Kincaid didn’t stay behind and sneaks up on the situation. Jojo motions him to go for the distraction rather than the gunfight. Eventually he does the crew gets free and the fight and of course beat the baddies. They return to the Fort and all is sort of okay until the next time.

The negatives-The pilot feels rushed. If it had been hours they would have had more time to introduce the characters and fit in enough time for an adventures. As it is the story seems a bit thin. The ships look slightly cheap even for the time. The outdoor sets seem very small.

The positives-The shots of the fort/planet look decent for the time. Doc and Jojo came across as the most interesting characters. My favorite part of the episode was Kinkaid doing what he should do to rescue the others.

Overall there is some potential in this one, but I felt like I wanted more to make the show standout and there wasn’t enough of that. However I know it was just one episode. On to episode two.