The President (a not so great Bill Clinton impersonator) has been kidnapped and cloned. Security force, old dude and clumsy guy Dick Dix (Leslie Nielson) is sent to the planet vegan to put an end to this plot before other world leaders are cloned and controlled. This should lead to espionage hilarity…yeah shoulda woulda coulda. Unfortunately you need a good script or at least a sense of humor to get some laughs. Instead we get lame slapstick, lots of talking, limp gags, weak aliens and a cast who look ashamed to be in this film (and they should be). Dix thinks he got the right president in place when they get back to earth, but of course he didn’t. Nothing else about this film has got right so far so why should this point be any different? Other celebrity look a likes who look very little like their celebrity show up at an event where Dix hopes to get the correct president in place. There’s a struggle and not just me struggling to pay attention to this “movie”. Eventually all is set right or at the very least the film ends…shew…roll the credits…please.

I saw this film back when it first came out on VHS yes VHS. I hated it then, but spent a buck on it at the Dollar Tree the other day.

I liked Nielson in Airplane, Naked Gun, Dracula-dead and loving it and some of his other comedies. However I can safely say this is the worst film I have ever seen him. Not his fault though although he did agree to be in it. It’s like 90 minutes of being subjected to someone who thinks they are the funniest person in the world, but they clearly have no idea how to be funny. They try gags that are sort of like ideas from the Naked Gun films, but they all fall flat in this outing. This is just painful like horribly painful, I felt very bad for Nielson for having to be in this thing. You are a strong person if you make it through this movie, but it will drain the life from you. You have been warned.

Was it worth one dollar? No, it wasn’t. 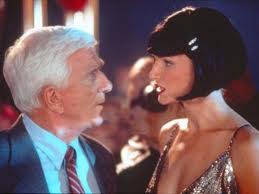