This Grinch person lives up on a mountain with his dog Max. He is fond eating onions, rubbing them on his pits and scaring off teenagers. So he’s kind of like an old geezer only greener. However this Grinch likes to sneak into the village and cause trouble as he vandalizes vehicles and messes with the mail. He runs into a girl name Cindy Lou Who and wraps her like a present for daring to think he has a shred of niceness in him. Ewww take that! After her run in with the Grinch  our little Cindy Lou starts talking to people. Hey look there’s a backstory on this Grinch. He liked this girl, but another Who wait who? Oh the Who that is now the mayor that’s who. Well, the now Mayor was a little Who and he made fun of the Grinch for a bad shaving job. So the Grinch was bullied and treated like dirt when he was little and he ran up the mountain and became mean. Wow what a fascinating insight into the Grinch’s mind. Meanwhile the Grinch chews on glass and talks to himself like a lot. Cindy Lou gets the not so wise idea to invite the Grinch to the village’s big celebration. The mayor and others think it’s a horrible idea, but they go with it thinking he won’t show. Only he does so he gets shoved through all kinds of fast moving events-some funny, some gross and some just plain odd. Eventually he gets made fun of again and is given a razor, he gets mad again so he causes more vandalism and hateful crimes before departing. The town blames Cindy Lou and her dad for daring to be nice. Hold on wasn’t this movie supposed to be based on a book of some sorts? Oh, right lets cram that part from the book in where the Grinch takes everything. That sets it straight now it’s kind of based on the book. So the Grinch is off to dump all that Christmas stuff and end the happiness of the Whos. Wouldn’t you know it Cindy Lou Who has stowed away on the sleigh? Oh no so they go a wild ride before the Grinch saves her and the Christmas stuff and takes it all backs to the Who. He admits his crimes – overacting, theft, overacting, breaking into Who houses, overacting and other stuff. They decide not press charges. The Grinch gets the love of his life and is accepted at last. Let loose the rainbows and unicorns and roll the credits. 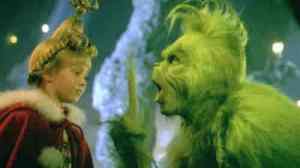 The negatives- I guess it boils to the cartoon was perfect so why make another version? Well to make money of course. So to take a children’s book and make it have enough going on for a feature length film you have to add some parts. I get that, but most of the added parts here tend to change the characters in ways that don’t appeal to me. The Grinch goes from being a simplistic sourpuss to having a grudge which makes him a little less likable for me. However I think the change that bothers me the most is the Whos. In the cartoon and book they already know the true meaning of Christmas and teach it to others. In this film most of them are a mess and it takes numerous disasters and near misses to make them grudgingly change. Maybe that makes them more like us, but I preferred it when they already knew what was important. Oh and Jim Carey rattles on way too much. He’s like a little kid on a sugar rush only grumpier.

The positives-Visually it has some real moments. I probably prefer the snow scenes and the Grinches lair to Whoville, but overall it looks good. Although I think the Grinch’s problems as a tike wasn’t a great storyline I did like the casting of Jeffrey Tambor and Christine Baranski as the the characters who were part of that piece. Carey has some moments as the Grinch as I smile when he rubs the onion under his pits and has his head clanged between the cymbols of a giant toy monkey.

As a whole it’s just alright. I watch it with the kids around Christmas every year, but we always enjoy the cartoon a lot more.

So this oddly shaped fella called the Grinch lives up on this mountain. He hates the Whos who live down in the village, he hates Christmas and apparently he’s not too fond of clothing because he strolls around naked. Christmas is coming so the Grinch develops this crazy plan where is going to animate the Statue of Liberty with goop and walk around in it oh, hey wait I think I just mixed up the notes of the Grinch with Ghostbusters 2. Now, here we go the Grinch will dress up in a crap Santa suit (yet he still doesn’t like pants). Then he makes his poor little doggie Max pretend to be a  reindeer. On Christmas eve they go down to the Who village and start taking all their Christmas stuff. So not only is the Grinch a near nudist but he’s a thief too. A little who named Cindy Lou Who wakes up and questions the Grinch, but he lies (another strike against him) and goes about his horrible business. He takes all his collected stuff in his sleigh back up the mountain to dump it and really create a mess. He thinks that this will really curdle the Who’s milk. However they wake up singing. The Grinch stops and realizes he’s been a real nasty guy so his new found goodness helps him to stop the sleigh from falling off the mountain. He and Max ride back down to the village, give all the stuff back and fortunately instead of beating the Grinch senseless for his crimes the Who’s are a forgiving lot. The Grinch has Christmas dinner with Whos and cuts on something called a roast beast. Now he’s a good Grinch. Roll the animated credits.

Positives-A great adaption of a wonderful Dr. Seuss book. The Chuck Jones animation is fantastic in bringing these characters to life. Boris Karloff is one of the few people who could have done justice to the Grinch. A classic cartoon through and through.