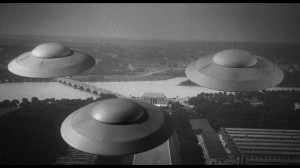 6-Klingon D-7. They may be the baddies, but that ship is smooth.

5-The Serenity from Firefly. Hey it’s backside lights up. 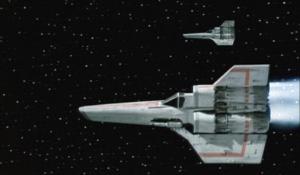 4-Colonial Vipers from Battlestar Gallactica. Give me one of them fancy Egyptian flight helmets and let me fly one of those around.

3-C57-D from Forbidden Planet. It looked and sounded great.

1-Well of course the Enterprise would take this spot.

One of my favorite decades for sci-fi. Most movie spaceships either seemed to be rockets or saucers. It seemed like we were sending up the rockets and invaders were in saucers. 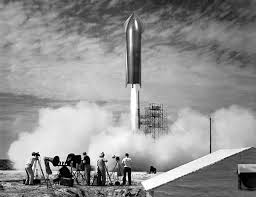 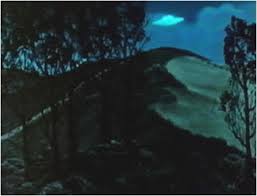 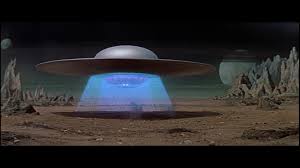 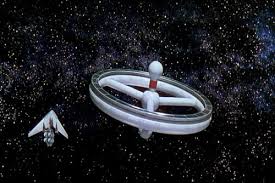 Joey Cramer as Bobby the boy who gets to fly around in a giant metal seed. He only had a few acting credits which also includes being in Stone Fox and Runaway.

Cliff DeYoung as Bobby’s dad Bill. DeYoung was a former musician turned actor who had tons of credits in movie and TV including lots of made for tv movies.

Veronica Cartwright as Bobby’s mom Helen. Come on she was in the Birds, Alien, Leave it to Beaver and tons of other stuff. Plus she is the older sister of Angela Cartwright (Penny from Lost in space like you didn’t know).

Howard Hesseman as Dr. Faraday the government scientist trying to stick his nose to everything. You know Hesseman as Johnny Fever on WKRP in Cincinnati and later he starred in Head of the class plus he has been tons of other stuff as well.

Sarah Jessica Parker as Carolyn who works where Bobby is being held and she feels bad for her. I remember her most for Square Pegs, but then later in life she did Sex and the city of which I am proud to see I have never seen an episode of.

So this kid who looks very 1980’s is supposed to be celebrating the 4th of July in 1978. Apparently back in the 1970’s dogs catching frisbes was a major form of entertainment. Just kidding, the dogs were great. Bobby is getting razzed by his bratty brother. Later Bobby ends up going off into the woods as he thinks something is out there you know like a lizard or a bird or a spaceship. He falls down and goes boom. Then he wakes up and goes to get back to his parent’s house only to find that they are no longer there, what the heck? In fact turns out he has been missing for eight years and hasn’t aged a day. Nifty trick if only it wasn’t freakin’ everyone out. The governments sticks their noses into this and grab Bobby to run tests on him and poke and prod him too just for fun. Turns out the govs also have this spaceship they think took Bobby. Apparently Bobby was taken by this ship in 1978 for a couple hour trip to another system way out there in space. They did bring him back but didn’t realize that he would only age a few hours because they traveled at the speed of light. However everyone he knew back on earth would age 8 years. Who-eee that science stuff hurts my brain. Bobby gets all restless and gets out of his room at the poking and prodding place. He gets into the spaceship where the computer talks to him. Bobby is supposed to know how to fly this thing and he gets it out of the compound which really causes the suit types to get all antsy in their pantsys. They go after him and his seed shaped ship. Bobby avoids them and eventually he has to choose to stay in 1986 or let the ship try to return him to 1978. He chooses to return to the past despite the danger that he may die because he thinks if he says in 1986 he will be forever studied and treated like an oddity. Good news for him is that it works and he makes back to 1978 where he is glad even for his bratty brother. Oh and he brought an alien bat looking critter back with him too.

I had never seen this before the other week. It’s a decent film for the family. A little slow at first, but it warms up. The effects were probably cool for the time and they do show quite a bit of the ship. I like that it’s flying over land and see instead of just the usual space.

A number of reviews of sci-fi films (particularly the space opera variety) might rattle on about themes, morals and such about a film. You know blah, blah, blah we want it all to sound so important. The reality is whether we are 8 or 98 or somewhere in between most real sci-fi fans want to know about what spaceships are in this. It’s like the technology may change, but it’s still all about the ride. Maybe I am oversimplfying, but I doubt it. Some sci-fi fans like to act all highbrow and get in deep discussions. Dude, that’s all a fake, we all know. We just want cool ships, we want them to go fast, shoot things and a comfortbale chair is still important in the future. I mean look at Kirk’s command chair, he’s the Captain so he gets the best view, biggest chair, great arm rests, swivel action too.

I’m being silly, but we all know that shaceships, the power of them, their functions and design are all a huge part of the appeal of this genre. Always has been, always will be.

So do you have a favorite ship or ships that you’d love to take for a spin around the galaxy?