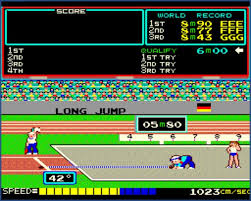 This game first popped at the bowling alley in early 1984. Other than a few auto racing games sports games weren’t common in 83-84. The home systems had a few, but they were often clunky with pixelated figures. This track and field game had characters that sort of looked like people-cartoon people with big mustaches but yeah people. Hey there’s no joystick on this game. You mean I have to smack the buttons to make my dude run well so be it. This game was tough, now was it tough because it was actually challenging or tough because it was awkward due to the controls you have to use? Maybe some of both because it does require timing to run and then jump on the long jump or hurdles. I totally stunk at this back in the day and now I’m just a hair above stinking. Even back then I only ever saw one kid who was much good at it. I remember his hands going like crazy trying to get his athlete going through the events. Obviously it was created to catch in on interest in the then upcoming 1984 Summer Olympics in LA that got less interesting when the USSR protested and didn’t show up. Even though I struggled at the game I kept feeding quarters into it. I think the graphics and the echoing arena type sound effects were a large part of the draw. It got released on home systems back then and in recent years so it certainly made a mark on others as well. 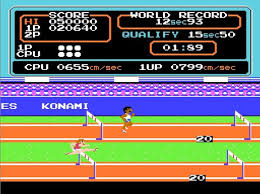 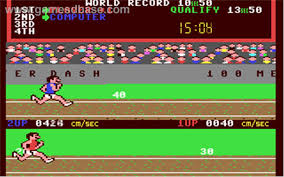