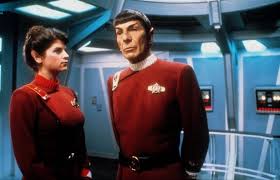 1-He’s finally Captain of the Enterprise even if it’s just for a little bit.

2-Spock would be and was great training young officers.

3-It’s just minutes into seeing Spock that was know he is back to being the Spock we knew from the show (unlike STTMP).

4-Not everyone looked good in that uniform, but Spock did.

5-Spock isn’t bothered by much of anything or at least he acts that way.

6-He was an excellent mentor for Saavik.

7-He manages to rile up McCoy without even trying.

8-The “by the book” part was classic.

9-He sacrificed himself to save the ship.

10-Leave it Spock to think enough ahead to save his being and put something rough on McCoy for the next film.

Easily the best Trek film ever this one followed up the mediocre STTMP and managed to capture the spirit of the show as well.

*Up on Thursday it will be an episode with Kirk and Spock both be bullied by grumps, giants with big nasty spears and pretty much everything going wrong for the crew. That’s right it’s the first season classic The Galileo Seven where Spock is put to the test.