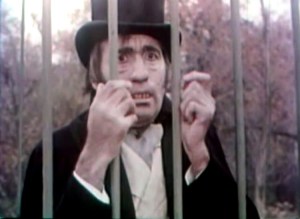 This Doctor type Marlowe (Christopher Lee) says he thinks all people have a good side and a bad side. To which the other doctor types says you are so full of..oh wait this is 19th century England so they say poppycock, you are full of rot and such. Marlowe thinks he knows best and starts shooting himself full of fruit punch or something. It gives him nasty teeth, messes up his hair and makes a him little more pale than he was. He goes around bars in the middle of the night walking funny and looking goofy so yeah no one notices him much. Then he bumps into a young guy (musician – actor Michael Des Barres) and they get into the lamest knife/blade fight ever and no one even gets killed-boo!Anyways the bad version of Marlowe starts calling himself Blake. Marlowe tells his mentor a little of his theories without telling what he’s actually done, but his mentor thinks he’s a nut bar for even suggesting that a guy could split into two very distinctive versions of good and evil. Marlowe continues to turn himself into Blake and the more he does the worse he looks (oh my) and the worse he acts (the fiend). Eventually he runs into a prostitute who makes fun of how awful he looks. So he waits for her, whacks her with his cane and leaves the broken cane there-guess the drug makes him stupid too. Marlowe gets his mentor to come over and reveals his transformation to him which results in the old guy having a heart attack-way to go Marlowe/Blake. While in a park Marlowe turns into Blake without trying so he know he losing control although not as fast as I am losing interest in this film. Although this does seem to a very strange park with empty cages, a band playing to a handful of passerbys and leaves that seem flying around at impossible angles. Meanwhile attorney Utterson (Peter Cushing) has suspected something was wrong with Marlowe and this guy Blake. When he compares handwriting of Marlowe and Blake he sees that they look the same. Utterson runs into Blake, they struggle, they start a fire and Blake catches on fire-aieee I am all a flame. He falls down the steps kaboom, dies ohhhh and transforms back into Marlowe bumbumbum. So roll those credits as quickly as possible. 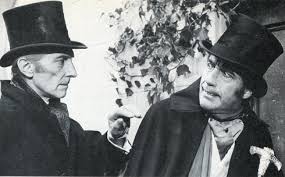 The negatives-Amicus is known more for their anthologies but if this project was in writing in may have said that Amicus films will do a version of Dr. Jekyll and Mr. Hyde starring Christopher Lee and Peter Cushing. That sounds great. Aw they decided to change the names Jekyll and Hyde to Marlowe and Hyde. Okay, I don’t know why it should still be good. Oh and they are going to film it in 3D. Well, that’s their choice it may be decent. What’s that? They scrapped the 3D process part of the way through filming? The aborted process has taken a lot of the budget and put the film behind schedule. Hey uh that doesn’t sound so good. Exactly so the film has a cheap feel to it much of the transformation scenes lacking much and there’s a lot of standing around and talking in this film. I guess they had to pad the movie with cheap stuff since they didn’t have money left to do much. Christopher Lee who is normally automatic in almost everything struggles and hams it up more than usual. The normally great Peter Cushing can add little to this film either. What we are left with is a rather uneventful, frequently dull movie.

The positives-I read that they used leftover sets from the musical Oliver! and if they good for them because the sets look very nice as do the costumes.

Actually I had seen this film before but only once. I bought it when it first came out on DVD almost ten years ago because it was one of the few Amicus films I had not seen at that point. I didn’t care much for it then and hadn’t watched it since so it was time to give it another viewing, but if anything it seemed worse this time around. 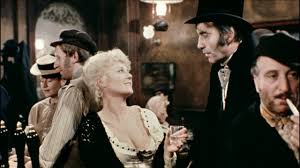